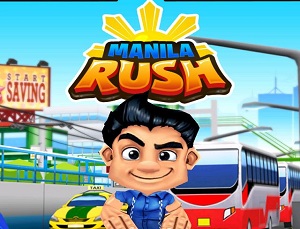 Manila Rush is a game that has been getting good reviews on Google Play, which you can download free on your Android phone. It lets you run through the streets of Metro Manila, avoiding cars, swerving buses and jeepneys, and lane cutting taxis. With its cartoonish rendition of EDSA, complete with road repairs and blockages, and even an MRT running at the side, you can now be entertained while stuck in traffic literally.

Anino Games, who had been supplying game apps to various game publishers worldwide such as Electronic Arts, Gamehouse, and Big Fish Games, created the Pinoy-themed game. According to its CEO, Niel Dagondon, “For the past 10 years, we’ve been doing games for others. Now we would like to go back to our roots as independent developer.”

They collaborated with Globe Labs, the development portal of Globe Telecom, for the operator billing system for purchases of in-game items such as 500m head start, hearts or lives, and boosters. It is the first mobile game to use this form of payment method and a good partnership to boot. Soon, Anino Games will release an iOS version of Manila Rush.

Young people are more active in gaming than ever before. Most of them have been dreaming to create a game of their own and be the next Dong Nguyen. Online stores like Google Play and Apple Store, or social media like Facebook, keep on releasing new game applications almost every day. With a wide array of gaming platforms available, everyone can come up with his own version of a game.

For four years now, CIIT College of Arts and Technology has been offering Game Development as one of its Computer Science courses. With Mr. Niel Dagondon as its school President, CIIT has a strong partnership with Anino Games that CIIT students use as an advantage. Students have the opportunity to encounter the likes of Van Halen Cunanan, one of the 3D animators of Manila Rush, and other game developers as their instructors.

With Anino Game’s support, CIIT has been improving its Game Development curriculum to keep up with the current trends and best industry practices to ensure that students are ready upon their graduation. One thing about Game Development course is the touch of Multimedia Arts; the combination of arts and sciences come to reality on this particular course. With game applications created and released every day, it will be no wonder that the school will produce a new breed of game developers from the fourth ranking gaming community in the world.