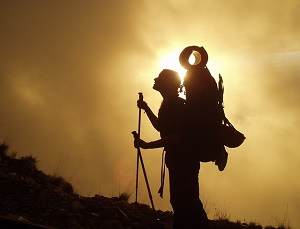 Who knew that a simple water bottle can bring two instructors together to form an awesome club? Sir Archie Jacinto brought up the topic of mountain climbing when he noticed Sir Jason Moss’s water bottle. When they got to talking about their passion for climbing, they wondered what it would be like if CIIT had its own mountaineering club. So they decided to formalize the group and started to train the participants for their first climb that was held on the 14th of July, 2013 on Mt. Manalmon in Bulacan.

“Masaya siya!” Sir Moss exclaimed as he expressed his happiness with the club’s first endeavor. He said that the students’ discipline was further developed as they climbed up the mountain with the help of the weekly training they had. It was fulfilling for all of them, especially for the first-timers of the newly formed group. Their professors said that being beginners did not become a hindrance to some of the students since they were actually ready and prepared when they started hiking. It was an easy climb for Sir Moss who has been mountaineering for a long time, but it was the best feeling for him to see the students delighted because they made it to the top, telling themselves, “Nagawa ko to?” or “Nakaakyat ako?”  while sitting and staring at the beautiful view, reaping the benefits of their hard work. It made Sir Moss wonder, “Ganyan din kaya ako dati?”

The advisers of CMC (CIIT Mountaineering Club) believe that the discipline the students will develop from mountaineering will not only help them in climbing but also when it comes to their studies. The students will also benefit health wise by developing their immunity, strength, endurance, and as Sir Moss added, “a clearer mind.”