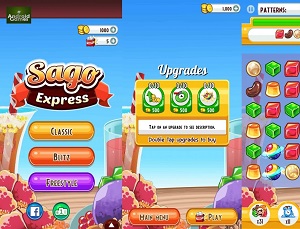 Sago Express is a puzzle game, whose game play won an award in the Philippine Game Festival 2013 as Best Mobile Game. Game play involves beating the clock as you try to find and remove as many patterns from the board as you can. For every successful pattern you find, you gain extra time or earn coins. Coins help you buy power-ups that help you advance your score even higher.

The challenge gets even better when patterns become complex as you increase the number of patterns you find.

A local version of the game, called Cherry Dots, was developed in cooperation with Cherry Mobile. The game incorporates operator (Globe or Smart) billing which allows gamers to use their phone credits instead of credit cards to buy game items.

Both games are free to download on Android phones Google Play, while. Sago Express is also available on Apple’s AppStore and Google Play. Watch out for the coming of different game modes such as Blitz and Freestyle.

CIIT College of Arts and Technology offers Game Development as one of its Computer Science courses. With CIIT’s strong partnership with Anino Games, CIIT students have an advantage. Students have the opportunity to encounter practicing game developers as their instructors. No wonder, CIIT College of Arts and Technology is becoming the school of choice in game development.