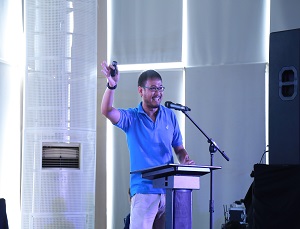 The Game Developers Association of the Philippines (GDAP) held its #GameFest2015, an annual gathering of game developers and enthusiasts in the industry, on October 2-3, 2015 at The Alpha Tents at the Alphaland Southgate in Makati.

Apart from being a sponsor in the event, our school President, Mr. Niel Dagondon, was one of the guest speakers of which he spoke about “Building studios that last”. Mr. Dagondon is the founder of Anino Games, the first game development firm in the country, now Anino Playlab where he is General Manager.

This is a very valuable topic most especially for start-up companies who wish to succeed in the industry. Mr. Dagondon highlighted the importance of management in building a studio, “running a studio is like running a business, it’s entrepreneurial. Anino Games then had to go through several struggles – and several games – before finally launching one of its successful and award-winning game, Anito.

He also pointed out the basics of running your own studio. Like all other companies, everything has to be in black and white. Formal written agreements for partners and stakeholders are a must. More importantly, find the essentials of the person in your team, “You don’t just build a business. You build people, and then people build the business”. It is important to motivate the members of the team to keep the fire burning. As you develop your games, always remember to take risks. Just because your game is winning awards, it doesn’t necessarily mean it will make money. “Make games for the right platform and don’t be afraid to shift paths”.

Mr. Dagondon closed his talk with an inspiring message, “Turn your passion to profit.”