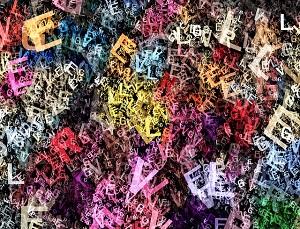 Figures Out of Letters

Students drew figures out of letters on canvass measuring 24” x 48” or 24” x 24” using different media. The guests judged these artworks based on a given criteria and the scores, in turn, formed 50% of the students’ final grade.

One of the top 3 artworks based on the guests’ scores was “Pop Art” by Jaycee Garcia and Justin Ambrosio. The letters and figures depicted the Philippines during the American era until the ‘50s and were done using acrylic paint on canvass.

Another artwork, on the other hand, utilized digital painting and image manipulation technique to bring out the essence of Filipino folklore in figures spelled as D-I-L-I-M in “Sabi-Sabi sa Gabi” by Justine De Leon.

Aside from the artworks in History of Graphic Design class, other students presented their works in photography under Mr. Ed Celestino, graphic illustration under Mr. Archie Jacinto, and traditional animation class under Messrs. Francis Zerrudo and Anton Dela Cruz.

Mr. Van Cleef Emracen, another guest, an art director and multimedia artist, was amazed to see that the animations were made by first year students. It only shows that CIIT has already molded these students to develop their talent in graphic illustration and video animation techniques this early in their course.

Just like what CIIT OIC-Dean Mrs. Cecilia Bacares said in her opening remarks, hopefully, the exhibit will be an annual event showcasing the students’ talent in visual arts and design.