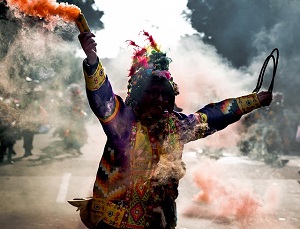 We may have all heard about them – stories of those dreaded folklore creatures – passed on by our elders. Here, our students made them into character designs very evident of their passion for graphics design.

Ekeks are bird-like humans from Visayan folklore. They can be classified as “Aswang” in the Philippine mythos but more similar to the dreaded Mananangal. Although it can’t severe it’s torso from it’s legs, it, too, has taste for flesh and blood, especially of children and unborn babies. They are called Ekeks because of the “ek-ek-ek” sound they make when they’re near, they can modulate their voice to confuse prey (humans) how near they actually are.

In ancient times, Bathala created seven moons to light up the sky as a gift to the ancient Filipinos. But a beast called Bakunawa thought otherwise. Bakunawa was amazed by such beauty and decided to devour it whole. However, he was not able to do it and instead fell in love with a human girl from one of the native tribes. Eventually, they were found out by the head of the tribe and their house was burnt to ash. When Bakunawa found out that his family was taken from him, he rose up and swallowed whole moons as an act of revenge. As he was about to swallow the last one, Bathala took action and banished Bakunawa away from the sea.

The family of Bakunawa fled and hid themselves from tribe to avoid death. They sought refuge from neutral shaman. The girl that Bakunawa loved had a child within her, carrying his legacy and his power. As time passes by, the girl gave birth to a child named “Juan” but sadly she didn’t survive after giving birth. Juan grew up, was trained by Shaman and soon had gained control over his father’s powers. Juan will eventually have to choose the path to his future or to take vengeance against the tribe that drove his parents apart.

Tirik is the wax lady that everyone in town really fears. A noxious creature that gets out of her den only on months of October to November. She has thick and hardened wick on top of her head which continuously burns with an immense heat that causes her wax coated skin to melt, just like a normal candle. This just goes on and on and does not stop. With some remaining skin, she still moans and cries because it’s an on-going suffering as she’s still physically alive and her body reacts to it. Tirik also has this ability to rip skins and flesh apart to be burnt. Through time it went really stiff and sharp, and to complete its ability to rip skins and flesh apart, part of her fingers was re-generated when she was reincarnated and blended in with the wick.

People say that Tirik was brought down to this world because of the God’s anger toward people who bothers the resting place of the souls. God thought that giving birth to this monstrous creature will frighten the townspeople and make them realize that they shouldn’t be bothering the sacred place.