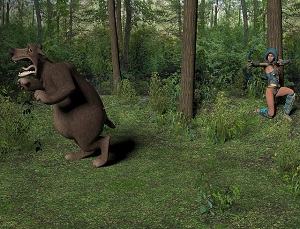 24 pre-teens and teenagers ages 11 to 19 had the opportunity to create their first 3D animated character last summer. For 8 days, from May 19 to June 4, these teenagers attended the 3D Animated Character Design workshop here at CIIT. This was their chance to use AutoDesk 3D Studio Max and Adobe Photoshop in designing their animation under the supervision of a high-caliber instructor and practicing game developer.

They were taught basic modeling tools and shortcuts, character modeling, texturing and mapping, skinning, posing, rigging, and of course, animation itself. At the end of the workshop, these teens had the chance to tour Anino Games’ office in Makati and present their final character design to game designers, game developers, art directors, and to its CEO and CIIT President, Mr. Niel Dagondon.

When asked what they thought of the workshop, most of them said that it was cool and fun, despite its difficulty. And at the end, they felt a sense of accomplishment because they were able to produce a 3D character design out of their hard work. To them, that was really cool.

Even their parents were happy that these teens spent their summer in something fun and worthwhile. These parents have seen their children developed their inclination into animation from simple drawing to using flash animation at an early age.

CIIT College of Arts and Technology offered this summer workshop to encourage grade school and high school students to start early in 3D animation and to see their inclination towards a future career in multimedia arts. CIIT believes that children these days are into internet revolution and see this opportunity to transform a simple hobby into a future career. Thus, CIIT is here to inspire the passion of these kids and has aligned its mission with the Philippines’ foremost game development company, Anino Games.

View this video to see the teen’s first 3D animated character design. See how these parents were proud of their children’s achievement. And you’ll agree that that CIIT is one of the best schools for 3D animation.