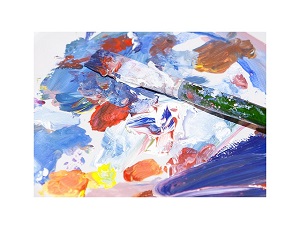 Regardless of rain and traffic jams, the sixth Graphika Manila convention was an event worth attending. Once again, the event brings together Manila’s brightest minds in the field of multimedia arts, graphic design and advertising, joining with several other professionals from around the globe, each with the intention of participating in the numerous discussions about the present and bright future of of the digital arts. With five halls in the SMX Convention Center in Manila, it was truly a festival celebrating the wonders of art and technology. Upon our arrival at the location, we were pleasantly surprised to see that there was already a long line of patrons at the entrance, eager to get inside.

Most flocked to the CIIT booth, where, immediately, our hosts Margoux and Marcus took the stage and welcomed all the attendees before introducing the first speakers of the day.

First up were Nico and Katwo Puertollano, the founders of 27+20, an independent multidisciplinary agency specializing in visual communications through design. Boasting of clients which included organizations from New York, Singapore and the Philippines, they began their talk with an inspiring message, proclaiming that “Creativity is not the pursuit of art; but the art of solving problems.” They then followed their powerful words with a speech which focused on the importance of complying with a client’s request and the need to adjust to any endeavor with ease, maturity, without any apprehension. The final showcase of the projects that they have accomplished, at the end of their talk, provided a rather sweet ending, and a teaser for what could happen when one followed their advice.

The Puertollanos was closely followed by CIIT’s own Van Halen Cunanan, who, at the beginning of his talk admitted to feeling both fear and excitement at the prospect of addressing a whole crowd. Cunanan, with wit and clarity, presented CIIT to the general public, while discussing the finer points of one’s education at such a prestigious and advance academic institution. With a captivated crowd, he ended his presentation by exhibiting a number of the works done by the talented and resourceful students of the young but powerful college.

CIIT’s very own 3D Animation instructor swallows nerves as he takes the stage to proudly showcase where Pinoy talent in Game Development is at present.

Dan Matutina, a designer and illustrator based in Manila, showed the audience a poignant, humorous and radical presentation, which resembled something that one would normally see in Children’s literature. He ended with a short but important advice which all students of art must constantly keep into mind, and that is that all “Art has to have a story.”

After the lunch break, PJ Richardson ushered in the afternoon session. A member of Laundry!, a design studio based in Los Angeles California which specializes in design, animation, and live action video effects, which has collaborated with artists such as Selena Gomez, Nikki Minaj and Green Day. PJ Richardson presented to the crowd some of their projects, which, at the heart of it, were simply comprised of basic shapes mixed with vibrant color, proving to the crowd that art need not be flashy and utterly complex.

Mike Friolo, a senior designer from Nike based in Oregon, followed soon after. The man behind Manny Pacquiao’s logo and crest,, he showed the crowd his creative process in creating Pacman’s insignia until he succeeded in creating the final piece. At the same time, he also showed the audience slides of his preliminary sketches for the boxing champ’s crest. Proud of being a Filipino, he asked everyone in the audience to get up and make one big wave for the Philippines, providing a proud and patriotic end to another worthy and memorable session.

Last, but definitely not the least, was Kevin Smith from Weta Digital, the acclaimed organization behind the animation seen in award-winning films such as Peter Jackson’s The Lord of the Ring’s trilogy and James Cameron’s Avatar. Based in Wellington, New Zealand, he amazed the crowd with a couple of animated reels and a few scratch to final video compilations. He then proceeded to talk about the difficulty of being an animator and the reality that it is calling that requires not only skill and talent, but patience, resilience and perseverance.

To cap the entire day off, a question and answer potion took place, where the participants asked inquiries regarding the the nature of originality and creativity, to simple procedural ones, like how to have a working Visa processesed, keeping everyone attentive and absorbed. Finally, there was the raffle, where premium items from Team Manila, Bratpack, Urbanears, Adobo Magazine, and the grand prize, a brand new Apple Ipad 2, were given to several fortunate members of the audience.

Overall, it was a successful event, one that left a strong sense of optimism and promise to those who were witness to the engaging sessions. As the audience took leave of the SMX Convention Center, one cannot be helped but be immensely inspired and motivated to get to work and take the first few steps to being just like the brilliant men and women who shared their ideas and experiences with the younger generation openly and freely.

3,000 artists. One school. CIIT showcases our very own students’ work with the jaw-dropping Lamborghini Transformers made by Noyelle catching everyone’s attention.

Cha and Nickole takes one last souvenir with the speakers.