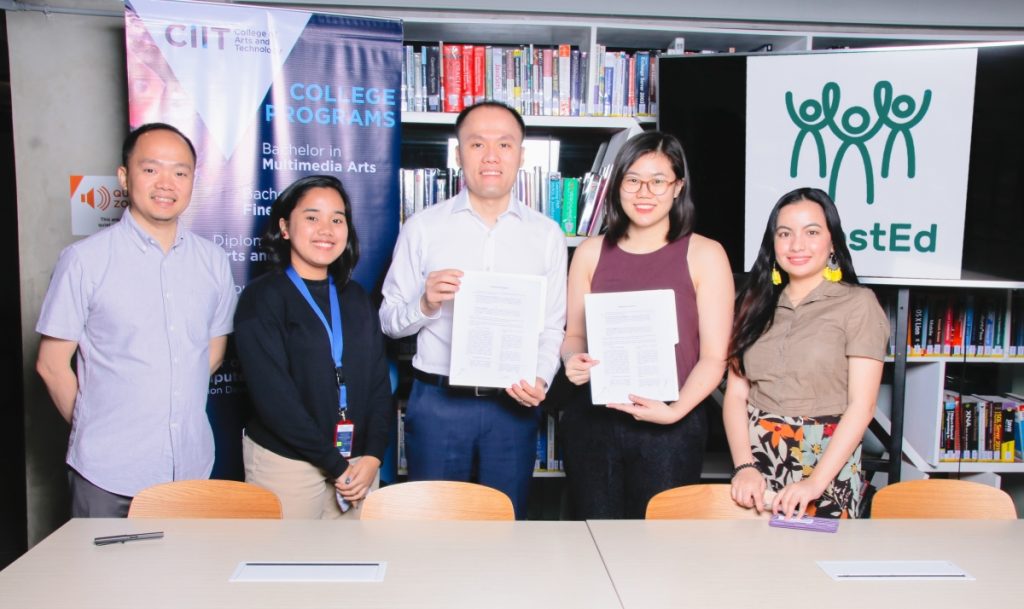 Students of CIIT College of Arts and Technology are now guaranteed a complete and financial-burden free college education. CIIT President, Mr. Sherwin O and Chief Operating Officer, Ms. Melissa Dee of InvestEd formally signed an agreement to officially mark the partnership of their respective organizations. The MOA signing took place at the Interweave Building in Quezon City on January 31, 2019.

Since 2016, InvestEd Philippines has been helping financially-challenged college students, to complete their tertiary education through a comprehensive student loan program. This undertaking is the brainchild of Carmina Bayombong, InvestEd CEO. After having observed a large number of college dropouts in many Universities around the Metro, she launched InvestEd. Two years of steady operation and the institution has aided around 275 students, 50 of whom are now graduates and currently employed.

After discovering the advocacy of InvestEd, CIIT Philippines has decided to adopt the program in order to offer financial support to their students. “The number one reason why students stop or delay schooling is due to lack of funds. CIIT’s partnership with InvestEd as an institution who provides educational loans is aimed towards giving our students and their parents an option, should they choose to do so, to borrow funds and complete their college education as soon as possible”, says Mr. Sherwin O.

Last term, Portia Banilla, a fourth-year student of Fine Arts, was granted a student loan, becoming the first “Investee” (student borrower) of CIIT, and beneficiary of the partnership. This is taking into consideration that she initially decided against enrolling at the start of the term due to financial difficulty. After bringing up the matter to the Students Affairs Office, she was encouraged to apply for a student loan with InvestEd. “InvestEd actually helped not just for this term but also the last one. I have unpaid balances last term which is also the reason why I almost decided to put off my studies. But InvestEd offered to pay for my balances, then my tuition for this term. On top of that, they also provided allowances that I am now using for school”, Portia noted.

In addition to the student loan disbursement, part of InvestEd’s initiative is to provide the Investees career and financial coaching sessions until they finish repayment. “Student loans are definitely a sensitive topic especially with real concerns on the possibility of being drowned in financial debt upon graduation. I think that CIIT’s understanding of the needs of its students in collaboration with the expertise of InvestEd gives us the ability to provide sound financial on how to manage loan repayment schedules before applying for it,” says Mr. O.

For more information about the student loan program of InvestEd, you may visit their website at www.invested.ph. To know more about the course offerings at CIIT College of Arts and Technology, check out their website: www.ciit.edu.ph or call (02) 411 11 96