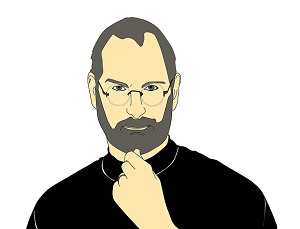 On Wednesday, October 05 2011, the world mourns the passing of one of the brilliant minds that gave shape and definition to present civilization. Steve Jobs, the man behind Apple, the company that gave the entire world the innovative and useful technology that literally altered the way we lived our lives, has succumbed to his long struggle with cancer. Just last August , after the release of the updated I-Phone 4 GS, Jobs resigned from his post as CEO of Apple and chose to be a chairman of the company’s board instead. There were speculations made that his decision to leave was attributed to his fight with a rare and aggressive form of Pancreatic Cancer, which led him to undergo a liver transplant and a series of difficult treatments. After everything he went through, his body finally surrendered, leaving behind the legacy he created with his own mind and hands, the company he has molded with his heart, the culture he changed with his vision, and the men and women he inspired with his exemplary leadership.

Steve’s life story is nothing short of astonishing. Born on February 25, 1955 at San Francisco, he was adopted by Paul and Clara Jobs of New York City. He attended high school in California, and at such a young age, frequented after-school lectures at the Hewlett-Packard Company in Palo Alto. Jobs also enrolled in Reed College at Oregon, but dropped out after only one semester. In 1976, Steve Jobs, along with Steve Wozinak and Ronald Wayne, founded Apple. In less than a decade, while struggling with financial difficulty and tough competition, he introduced Macintosh to the world, with the advertising tag line, “Think Different.” In 1998, the iMac is introduced, solidifying Apple’s place in history, proclaiming that Apple computers are more powerful than what any company is manufacturing. This milestone was continued in 2001 with the arrival of the iPod, changing the manner in which people listened to music forever, as it enabled them to have their own music library in their pocket. 2007 came the arrival of the iPhone, which redefined mobile phone technology, and finally, in 2010. the tablet revolution took place as Apple introduced the iPad, changing the frontier of technology and entertainment once again. Other than his work with Apple, Jobs has also made significant contribution to 3D animation and production, as he held the reigns to the animation empire Pixar, which garnered acclaim and recognition for their numerous contributions to the film industry.

After everything he has done for the world, it is quite impossible not to grieve for one of the world’s most astounding human beings, one whose work can be compared to the likes of Johannes Guttenberg, Thomas Edison and Alexander Graham Bell’s. Through sheer determination, through his relentless and immeasurable passion, he showed the world what one can do to change the world for the better, and provide everyone with a future one can fondly hope for. The Cosmopoint International Institute of Technology is grateful for what Steve has done, and mourns the loss of the man who, in such a small time, did all he could do to assist humanity in their unending quest for pleasure, progress and knowledge.

Steve Jobs during the launch of the first ever iPhone which would completely change the world of smart phones.

Steve Jobs on the April 2010 cover of TIME Magazine