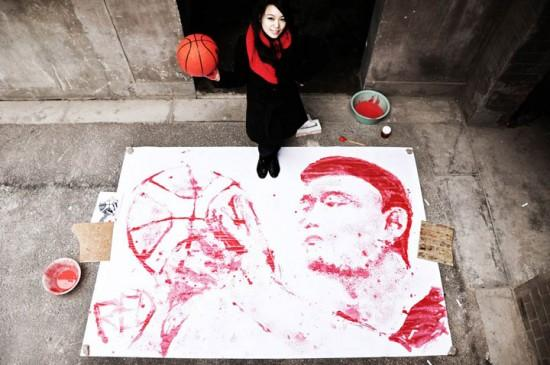 We know that people will go to great lengths for art. What we don’t know is how some extra passionate people define “great lengths” for us, it could be lying in the mud to take that amazing bottom-up shot or standing in the middle of a busy street to capture those headlights whizzing by your model but for some people, that’s just the tip of the EXTREME meter. Here are some people who bumped the passion up to 11 and literally put it all on the line for their art.

When I was a kid, I was always excited to go to my aunt’s office to play around with the typewriter. I wasn’t there to type down stories or essays or some other intellectual pursuit, I was there to tap away at the keys, hear the “ding” at the end, roll up the paper, and tap away at the other line. That was it; no fancy reasons or whatever. I was a simple kid.

On the other end of the childhood joys spectrum is Paul Smith aka the Typewriter Artist. Born with Cerebral Palsy, Paul developed an interest in creating typewriter art at age 11. He started toying around with a discarded typewriter as a way for him to express himself since the whole Cerebral Palsy thing was getting in the way of functioning normally. Now this may all be amazing already but there’s more! All of his pieces only made use of the following keys: !, @, #, %, ^, _, (, &, ). One man, one machine, one heck of a portfolio.

Art Attack was famous for a number of reasons; there was Niel Buchanan’s art tutorials, usually with stuff that you could find lying around the house, that weird animatronic head, and the Big Art Attacks; where Niel would use a road or parking lot or whatever area he was in as his canvass. The Big Art Attacks are sights to behold, covering a wide area. On the other end of the spectrum, we have Dalton Ghetti who prefers creating sculptures out of PENCIL LEAD and no, we don’t mean giant mounds of lead; we mean he makes sculptures on the sharpened ends of pencils. Those fragile bits that you so much as apply a minor amount of force while writing? This man just straight up carves them into miniature works of art. When you’re so meta that you turn your art tools into artworks.

Some would say that watching athletes doing their thing is like looking at a beautiful painting. There’s just something about a UFC fighter pulling off an impressive knockout kick off the cage walls, or a basketball team just fluidly controlling the ball and making shots that makes you go “Woooooooow!”. Speaking of basketball and art, Chinese artist Hong Yi decided that those two things would do well together so she made a painting of Yao Ming with a basketball! Before we proceed, let it be known that ants and most insects are both terrifying and pretty. On the one hand, it’s amazing to see ants working together in massive colonies. They’re so organized cooperative, humanity’s got nothing on these little creatures in terms of working together. Ants are literally THIS CLOSE to taking over the world, we’re just lucky enough to be smarter and way larger than them. Bow down to our overlords.

One thing we do have above ants though, is artistry. Just ask Chris Trueman, a painter from California. He’s got a Master’s Degree in Fine Arts, has lectured in numerous educational institutions, and held numerous exhibits. He also created “Self Portrait with a Gun” out of 200,000 ANTS. According to Mr. Trueman, the portrait shows how humanity learns, first by looking at the big picture, but the closer we look, the more new things we discover, like the nice photo being made of hundreds of thousands of dead ants. Regarding the whole creative process, Trueman said that killing all those ants wasn’t enjoyable. He started ordering only small batches but eventually he saw that he was going to need a lot more, hence the two hundred thousand insects. He also had to sort the ants and pieces into different sections of the portrait depending on their size and the object that they would be part of.

If you want to find a school that will bring out your inner creativity, check out www.ciit.edu.ph, we have senior high school, college, and specialist courses for artists of all levels.